iTromsø: Can you say something about when you were invited to take part in this exhibition, and how you came into the idea of displaying a flag with oil spill?

Oliver Ressler: During the summer of 2019 I was working on a new film at the world’s largest facility for carbon capture and storage, the Technology Centre Mongstad in Norway. The film “Carbon and Captivity”, completed since then, was facilitated by Entrée in Bergen. Entrée’s director is Randi Grov Berger, the curator of “Flag Tromsø 2015-2020”, who invited me to produce one of the flags for the cycle. This invitation did not come as a surprise, as flags play an important role in several of my art works. One of my most well-known works is the 8-channel video installation “What Is Democracy?” (2009), shown among many other places at documenta in Kassel in 2017. The installation includes the images of burning flags of the US, UK, France, Russia, Taiwan, Hungary, Poland, Germany, Australia, Denmark and a few more.  Coming from outside Norway, when thinking about Norway there is this immediate connection to petroleum. So, I decided trying to merge a visual representation of the dangers of petroleum extraction with the national symbol and created the “Oil Spill Flag”.

iTromsø: Have you been following the debate going on in Tromsø, and how do you feel about the exhibition being the centerpiece of a somewhat polarizing debate?

Oliver Ressler: I have been following the debate with great interest. On the one hand I am happy my piece can act as a catalyst for this debate. On the other hand, I wished the debate would go beyond this confrontation between reactionary conservatives that can’t bear their national symbols being smeared and those who try to defend liberties in a liberal democracy. What really matters to me is this: We are in the middle of a climate crisis, and every month we lose in this struggle against fossil fuel extraction will need to be paid for. All of us can feel the irreversible effects of the climate catastrophe already now, but people in the global south will have to bear the consequences to much more, because huge parts of their countries are already in danger of becoming uninhabitable within a few decades. The forced migration of hundreds of millions of climate refugees will have consequences all over the world. Since past generations of politicians failed to introduce a functioning binding international legislation to reduce carbon emissions, it is the responsibility of our generation, of all people living today, to act and fight. So the debate we need to lead now is actually: how to achieve a global transition to a just and carbon-neutral society? I regard the fact that Norway funds decarbonisation through the extraction of oil as hypocrisy. If you add the carbon emissions from the burning of the oil Norway exports, Norwegians have one of the highest per-capita carbon-footprints globally. So, Norway is definitely no positive role model for this needed ecological transition. That is actually the discussion I hope the “Oil Spill Flag” can help to bring about.

iTromsø: Using the Norwegian flag: Did you anticipate the reaction the artwork would receive from some amongst the local community, and do you understand these reactions? Why/why not?

Oliver Ressler: I have been working as an artist in public space for more than 25 years, and I would say it is never possible to foresee the reactions, especially because in public space you have an audience from diverse cultural and social backgrounds. Very often simple gestures are more likely to generate a wide debate. I say this because most of my work is quite text-intensive, and to narrow down a work to an image (without text) for me is much more of a challenge than the flag might appear to be.
Over the years I experienced all different kinds of reactions to my work, including censorship and theft. The last time one of my art pieces was stolen was in public space as well, in the city center of Aarhus, Denmark in 2004 at the Aarhus Festival of Contemporary Art. In that instance too it was a highly controversial work dealing with the function of state racism for capitalism, and obviously some people could not stand having to watch this work in the city center for too long.

iTromsø: Some conservative politicians have been trying to label this flag as illegal, while the mayor, Gunnar Wilhelmsen, has been clear that he will not interfere. What is your opinion on politicians trying to ban an art piece and get it taken down?

Oliver Ressler: We see this all over the world: The right is using cultural battlegrounds to mobilize voters while helping covering up those questions that are really important: Who profits from extractivism? How are these immense profits distributed? Who pays the social, economic, ecological and political costs of extractivism on a global level? How are our democratic and legal systems undermined through corporations? What do right-wing parties and individuals get in exchange for helping transnational corporations covering up the environmental and social consequences of doing their business as usual?

iTromsø: The first person to steal the flag was former supreme court attorney Gunnar Nerdrum, who is also quoted saying he will consider removing it again. If you had the chance to speak with him, what would you tell him or ask him?

Oliver Ressler: I won’t waste my time talking to angry old men who won’t listen anyway. I dislike that society allows the former supreme court attorney to appear so self-confident, even after committing theft. The right is never shy about defending its actions by laying claim to superior morality. I really hope this mindset will be overcome soon, because we as humanity should concentrate on building the democratic societies of the future that will be less hierarchical, more just, egalitarian, inclusive, and carbon neutral.

iTromsø: Your piece is pointing to Norway’s role in the climate crisis, and as far as I know no other flag on exhibition locally has received as much publicity. Do you think the message is getting through to people, or are you afraid its message is drowning in criticism? Please elaborate.

Oliver Ressler: The exhibition of the flag generated a quite impressive debate. But as described I believe the debate has to go beyond what has been talked about so far. The new round of the debate should address: How to achieve that fossil fuels stay in the ground? To have the flag visible for a longer period is important for that reason. But in the night from June 19 to 20 it was stolen for a second time. Therefore, I want to make an offer: I would like to donate the “Oil Spill Flag” to an institution or individual committed to install it visible to the public in Tromsø for at least a year. I will donate the flag – an original art piece from me that also represents a certain value – to this person or institution, that seems to be most capable of granting the visibility. 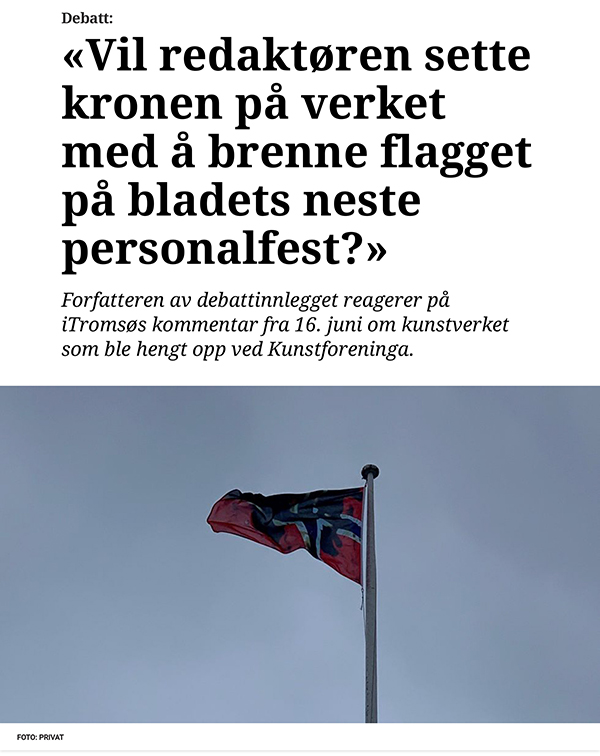 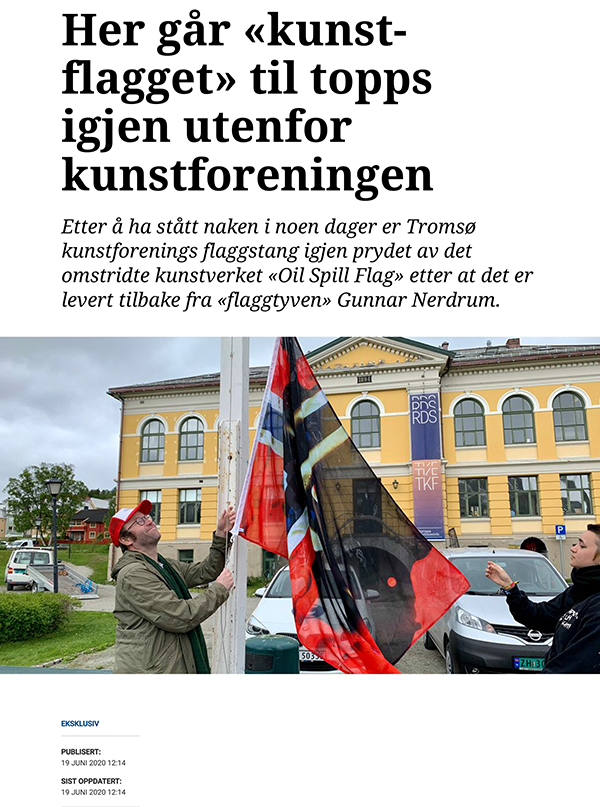 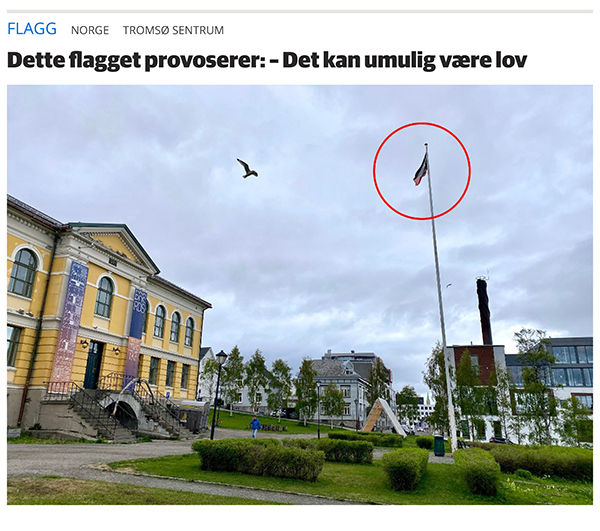